When HR&A released its first major tech ecosystem study in 2014, we were struck by the immense opportunity for economic mobility: unlike other growing, well-paying segments of the economy, many tech jobs did not require a formal degree or prior job experience, and, better still, those same jobs paid well above a living wage. Here was a sector the rapid growth of which could benefit a broad spectrum of workers and help narrow racial income and wealth gaps.

Since then, we’ve worked with clients across the U.S. to try to leverage tech for opportunity, helping the City University of New York strengthen industry partnerships, promoting skills-based hiring through the Skillful Initiative, and working with innovation districts to promote equitable hiring and startup support, among other strategies. Countless other advocates, educators, nonprofits, government agencies, and tech employers have done more, pioneering new approaches to skills training, startup support, and culture change.

Yet today, tech’s racial equity crisis is as deep as ever. Black and Latinx workers are grossly underrepresented across tech, as detailed in our recent study of New York City’s tech ecosystem with Jobs for the Future, LaGuardia Community College, and NYCEDC. Black and Latinx tech workers report exhausting and racist workplaces. Most venture funding flows to White males, who dominate leadership positions. These disparities not only have implications for income and wealth equity, but the absence of Black and Latinx workers on tech teams also reinforces structural racism, as shown by bias in facial recognition software and algorithms for search, health care, and hiring.

Closing tech’s equity gap will take bolder action than we’ve seen to date. We are seeking to support change in two ways:

Over the last decade, the national tech ecosystem grew 60% faster than the economy as a whole and now represents 12 million total jobs.1 From 2010 to 2019, tech represented 11% of new jobs and 13% of new income across the U.S. 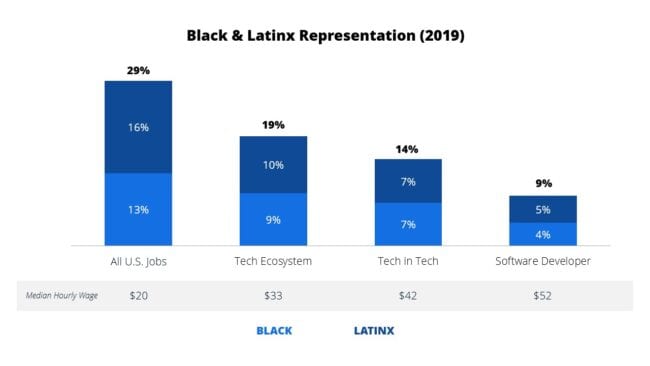 The result of these disparities is an estimated $46 billion “racial income gap,” consisting of: 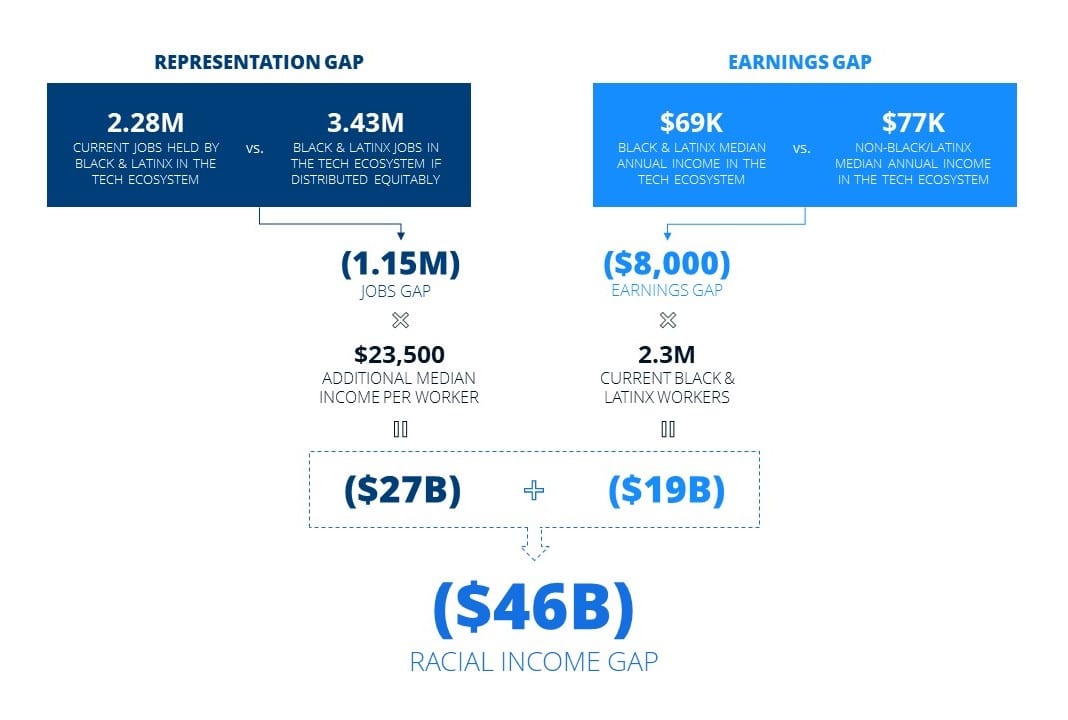 Given these trends, the racial income gap has actually widened slightly over the past decade as the overall workforce has grown more diverse. If tech hiring continues on the same trajectory as in recent years, tech’s representation gap will continue to grow over the next 10 years. To eliminate this gap within 10 years, tech employers would need to hire Black and Latinx candidates for at least 2 out of every 5 open tech positions, versus 1 out of 5 today overall and 1 out of 7 for core tech occupations. 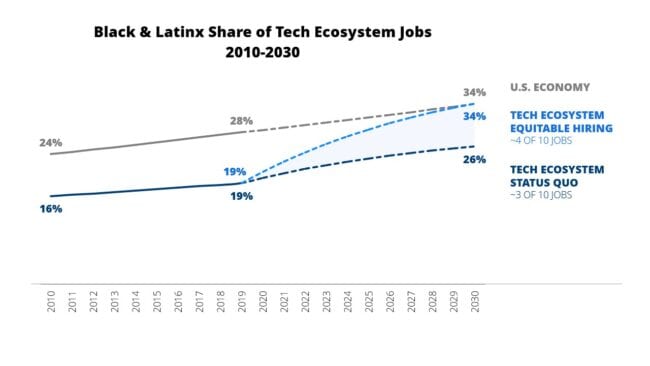 Research debunks the oft-cited view that the root of the problem is the talent pipeline; 20% of computer science graduates are Black or Latinx, well above their share of tech positions (14%), especially at Big Tech firms (<10%). To meaningfully address tech’s racial income gap, employers will need to not only rethink their hiring practices but also look to aspects of company culture that limit the advancement of Black and Latinx recruits, rethink the recruitment practices that pass over Black and Latinx talent, and invest more deeply in new models to train and onboard talent from more diverse channels.to train and onboard talent from more diverse channels.

Where to go from here

At stake is not only billions of dollars of annual income that could help mitigate deep racial wealth disparities, but also the full participation by Black and Latinx Americans in a democracy that is increasingly tied to who makes, uses, and controls the tools of the 21st century.

How can we meaningfully build greater equity in tech? Read more for initial thoughts on how leading tech equity organizations plan to use the above data for change, sourced from across industry, advocacy, and policy. And let us know your thoughts at justandresilient@hraadvisors.com.

2 This gap is wider if we compare the makeup of tech jobs to that of the working-age population, since Black and Latinx workers have above-average unemployment rates and below-average labor force participation rates.