Multifamily Affordable Housing Strategy for the City of Detroit

The City of Detroit’s Multifamily Affordable Housing Strategy provides a blueprint for related City policy, driving toward the goal of preserving and developing 12,000 multifamily affordable units by 2023

As Detroit’s housing market recovers from decades of disinvestment, some residents are unable to find adequate and affordable housing in the city. In some areas, demand is increasing for urban amenities and housing costs are rising. Elsewhere in the city, other neighborhoods face steep obstacles to regaining economic strength.

While the City’s Housing and Revitalization Department is actively promoting preservation and new development of affordable housing since the City’s emergence from bankruptcy in 2014, it did not have a formalized strategy for pursuing policies and programs to realize its equitable growth goals. Such a strategy would allow the City to proactively message its affordable housing goals to the market and track progress against those goals.

To guide the City’s future initiatives related to affordable housing development and preservation, inclusive growth, homelessness, and housing development in priority planning areas of the city, HR&A worked closely with the City to develop a public-facing housing strategy document that expressed the City of Detroit’s housing priorities and established a formalized plan for implementation.

HR&A reviewed our previous assessment of Detroit’s housing market, which tested the feasibility and impact of affordable housing policies and recommended those that would be most effective in Detroit. The knowledge developed in this stage of work was key in developing a strategy outline and coordinating the drafting of content for all initiatives with support from the City and partner organizations. Finally, HR&A oversaw the production of a document designed for public release. HR&A brought a unique combination of experience in national affordable housing policy analysis and a recent, in-depth understanding of multifamily affordable housing and the multifamily market in Detroit to the strategy’s development.

The city released its Multifamily Affordable Housing Strategy in the spring of 2018 with the goal of preserving 10,000 existing affordable units and developing 2,000 new affordable units by 2023. As the first strategy of its kind in Detroit in decades, the document will guide the City’s future work of ensuring new growth is equitable and that residents of all incomes have quality housing accessible to public transit, employment hubs, and other essential services. The City has already established an affordable housing loan fund and is implementing initial strategies arising from the study. 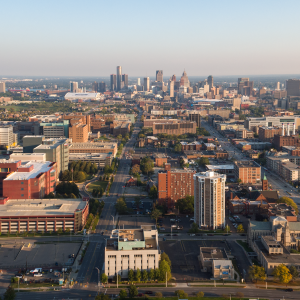