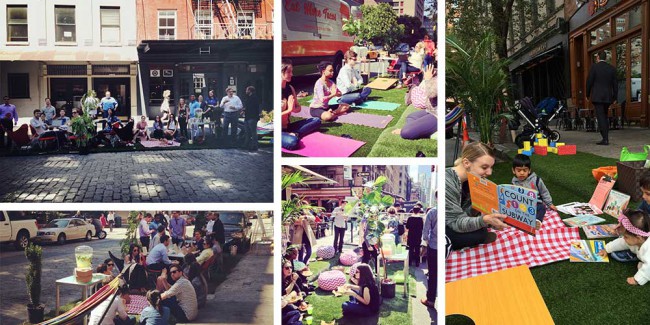 HR&A Advisors invites pedestrians to join us in celebrating vibrant urban public spaces on Friday, September 18th, when we transform three parking spaces in New York and Los Angeles into temporary parks as part of PARK(ing) Day 2015. First conceived in 2005 in San Francisco, PARK(ing) Day challenges people to rethink the way streets are used and reinforces the need for broad-based changes to urban infrastructure. Since 2005, the project has blossomed into a worldwide grassroots movement: Past PARK(ing) Days have included nearly 1,000 “park” installations in more than 160 cities in 35 countries on six continents.

HR&A Los Angeles will be partnering with the office of Mayor Eric Garcetti to “Roll out the Green Carpet” on Hollywood Boulevard, one of the City’s first “Great Streets.” Join HR&A LA at Hollywood and Vine outside the Hollywood Pantages Theatre from 12 to 6pm and take a break in one of our three programmed spaces. We will have a “Think Tank”, where you can brainstorm urban solutions with the Mayor’s team and HR&A in a “pop-up office” with free WiFi and cold brew coffee from Outpost Cold Brew. Or get your puppy-fix in the “Barklet” and play with dogs who are up for adoption from the Los Angeles Animal Services Department. If you need something a little more mellow, immerse yourself in the LA Philharmonic’s virtual reality orchestra experience, VAN Beethoven, with a 360 degree, 3D performance of Beethoven’s Fifth Symphony.

On the other side of the country in New York City, HR&A’s temporary pocket park will be located on the corner at Greenwich Street and Franklin in Tribeca, from 9am to 5pm. Our “parklet” theme will focus on the NYC waterfront and will encourage pedestrians to think about how they use the waterfront now, and what lies in store for its future. In partnering with the The Waterfront Alliance and the New York Public Library, we will bring aspects of the waterfront to our parklet with recreational activities, water, and education. We hope you can join us at our parklet, which will include: paper boat making and a pool, a ping-pong table, a hammock, wifi and desks, story time with the NYPL, educational programs from The Waterfront Alliance, live plants, fake grass, and a voting system to understand how Tribecans think about the future of our waterfront.

HR&A’s participation in Park(ing) Day reflects our commitment to creating dynamic urban public spaces that strengthen communities and address city-wide challenges such as resiliency and economic development. Drawing on insights from our open space practice, our parklets are designed for maximum versatility, to accommodate a diverse set of users and events throughout the day.

Read about our Park(ing) Day installations on our website (2013 and 2014), and at WNYC, Untapped Cities, Tribeca Citizen, and on NTD Television.