Why Pricing is Key to a Driverless Future

“Transportation will change more in the next five years than it has in the last 50 years,” claims Mary Barra CEO of GM. But what if we are already there? Since launching its ride hailing app in 2011, Uber has expanded to 570 cities and grown into a $70 billion company, surpassing the valuation of GM. In Helsinki, riders are using their smartphones to book and pay for rail, bus, bikeshare, rideshare, and rental rides. Cities around the world are racing to create spaces for the prototyping and testing of autonomous vehicles. 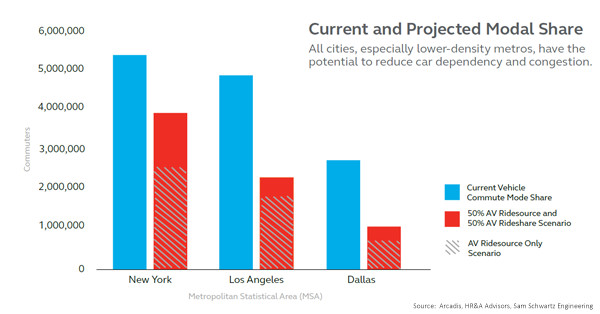 Whether autonomous vehicles will become a problem or a solution for cities depends on who you ask, and more importantly, what we do. At the National Summit on Design & Urban Mobility in Pittsburgh, we heard strong consensus that with the right policies and partnerships in place, cities can avoid problems like congestion and pollution and ensure that autonomous technology will support long-stated goals for social inclusion, mobility and sustainability. So how do we get there?

To help cities prepare for a driverless future, HR&A recently identified six policy solutions along with our partners Arcadis and Sam Schwartz. In our policy roadmap, Driverless Future, we concluded that that one of the most critical tools cities can use to shape autonomous vehicles is pricing.

Ultimately, the biggest barrier to pricing may not be technological but political. Each city is different, but recent precedents provide encouraging lessons. Stockholm’s congestion charge was first introduced as a seven-month pilot, which allowed residents to experience its benefits before approving it permanently in a referendum. In November 2016, voters in Los Angeles, Seattle, Indianapolis, Raleigh, and other American cities approved new taxes to fund over $200 billion in public transit improvements. These examples show that voters are willing to support change if city leaders can clearly articulate a vision, specific actions, and demonstrate their benefits for daily commutes.

Cities and technologists should be equal partners in the roll-out of autonomous vehicles. With the right pricing on our roads and real estate, we have an opportunity to create a more connected, sustainable, inclusive, and driverless future.

If you’re a city leader, urban planner, or policy expert who is working with autonomous vehicles, we’d love to hear from you.

Martin Leung is the co-author of “Driverless Future: A Policy Roadmap for City Leaders” and a Director at HR&A Advisors.