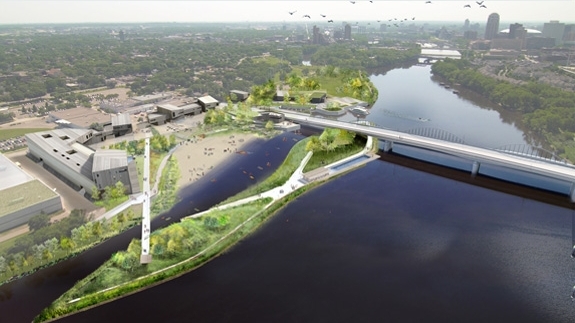 The Minneapolis Park and Recreation Board unanimously voted to formally adopt RiverFIRST: A Park Design Proposal and Implementation Plan for the Minneapolis Upper Riverfront. The plan, which grew out of the yearlong Minneapolis Riverfront Development Initiative (MRDI) planning process, was completed by Tom Leader Studio (TLS) and Kennedy & Violich Architecture (KVA) in collaboration with HR&A Advisors. When complete, RiverFIRST will be the largest expansion of the renowned Minneapolis park system in over 100-years.

For the past year, HR&A has worked intensively in collaboration with the Park and Recreation Board and TLS/KVA design team to shape the proposed redevelopment of 5.5 miles of the Mississippi riverfront north of Minneapolis’ downtown core in a manner that would promote the economic development of the city while not creating undue fiscal burdens. The riverfront plan passes through some of the city’s most deprived communities and industrial lands, and includes new signature parks, environmental restoration projects, and real estate developments. It also completes critical links in the city’s famous Grand Rounds bicycle network.

HR&A served as strategic development advisor for the MRDI planning process. We helped identify priority sources of capital funding and strategies for the coordination of project implementation and stewardship. Approximately $20M has been dedicated for the implementation of RiverFIRST, including development of the central riverfront, where HR&A is also working on the WaterWorks conceptual development framework.