Microtransit & Transit Agencies: A Bridge to our Driverless Future

For the first time in nearly a decade, transit ridership is down in almost every major metropolitan area in America. Even as cities experience impressive growth and increased demand for dense, walkable neighborhoods, transit systems in the United States are stressed. According to the American Public Transit Association, U.S. transit ridership has decreased by 400 million rides, or nearly 4%, since its decades-high peak in 2014. Many factors have led to this decline in ridership, but there are a few main culprits in this transit-whodunnit: decades of disinvestment in state-of-good-repair and maintenance; lower gas prices; and transportation networking companies (TNCs) like Uber and Lyft offering low-cost, on-demand, door-to-door service.

Autonomous Vehicles: Disruption on the Horizon

The disruptive impact of TNCs on conventional public transit agencies will only be further compounded by autonomous vehicles, which will make on-demand trips even cheaper and more convenient. Though manufacturers are still testing autonomous vehicles, and have considerable obstacles to overcome, widespread adoption will arrive sooner rather than later. Industry experts expect the technology to be widespread by the early 2020s.

If the advent of the internet, smartphones, and Snapchat filters have taught us anything, it’s that we should embrace this disruption and use it to improve our public services. In fact, cities and transit agencies can start curbing declining ridership now, while also creating a vision for the future of public transit.

How? By embracing microtransit.

Microtransit is not new, and you may have even ridden it before. It can go by many names, in many forms –  jitneys, airport shuttles, dollar vans, or downtown connectors. No matter the name, these services all have a common purpose. Today, the proliferation of smartphones and route optimization algorithms makes it easier, more customer-friendly, and less expensive for cities and transit agencies to provide microtransit services. Using dynamically generated routes – riders can call a vehicle to any shared destination just by using an app on their phone.

Instead of regulating micro-transit to the edges of our public transportation systems, transit agencies can embrace the convenience of dynamic routing to address the long-standing challenge of first and last mile transit connections. Microtransit can work in concert with existing transit networks by improving accessibility to less-traveled, previously inefficient routes, which eventually connect to higher-capacity transportation corridors already served by fast trains and buses.

In the short term, the convenience and simplicity of seamlessly integrated microtransit with conventional public transit can help improve customer service and serve more riders. In the longer-term, well-designed microtransit vehicles (perhaps autonomous) will get people out of their own cars and onto the transit system, reducing parking demand at pick-up points and destinations. This behavioral shift will have significant impacts on land-use planning, economic development, and the ability for transit agencies to cultivate new revenue streams.

Robust microtransit may help cities and transit agencies reduce parking and catalyze development of underutilized space. Station parking, an often costly and inefficient use of space, can then be redeveloped to build housing that accommodates growth.  The Regional Plan Association estimates that in the New York metropolitan area alone, we could build up to 250,000 homes on existing station-area parking lots. Redeveloping park and rides is a no-brainer: it encourages growth, increases the tax base, provides more housing options for young people and baby boomers, and creates more walkable, dense nodes near transit. But residents will be reticent to give up their parking if they are not assured they will have equivalent or better ways to get to the station. 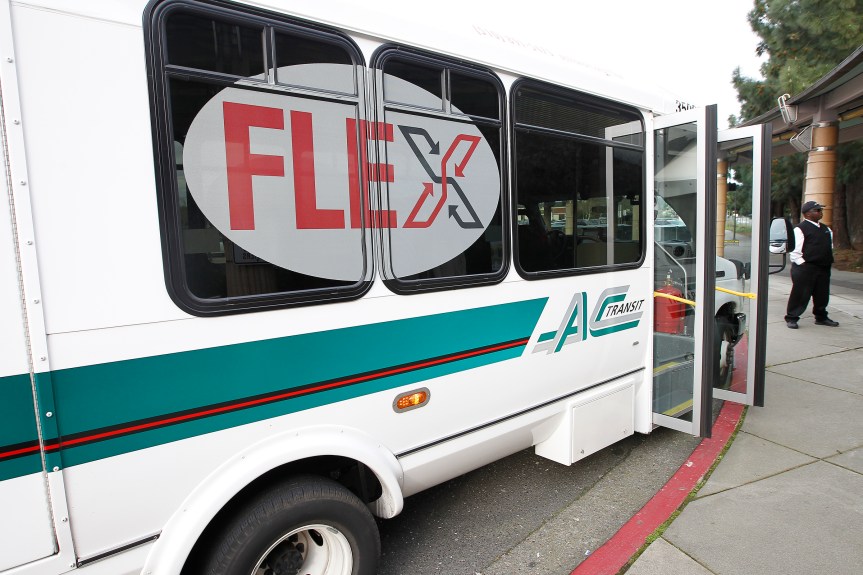 First-Movers: On the Cusp of a Revolution

Some transit agencies and municipalities are starting to see the potential for microtransit in their communities. The Eno Center of Transportation recently issued a fantastic report on the growth of microtransit systems in the United States.  The City of Summit, New Jersey introduced a pilot with Uber, and now with Lyft, that allows Summit residents to ride to and from their commuter rail station during weekdays for the same cost of a daily parking space. This program has already helped the city avoid making capital investment in a new parking deck. East Bay suburbs are piloting programs to replace or enhance existing on-demand shuttle services around BART stations, and to replace low-performing bus systems. Large, sprawling cities are also getting in the mix –  LA Metro is building a pilot microtransit program to help address first and last mile issues in target areas in its vast, low-density, service area and Dallas’s transit agency has introduced its own on-demand shuttle service.

As more cities and transit agencies experiment with microtransit, more details on the benefits and challenges associated with the various systems employed will emerge. While we have outlined some potential approaches to creating microtransit pilots around the country, it’s clear that more localized research is needed, particularly on how microtransit’s costs compare to traditional bus or jitney service, and how its use will impact customer transportation and parking behavior.

As our driverless future approaches, new bus and train infrastructure is built, and nascent transportation start-up ventures are being tested, America’s urban centers are moving towards a truly multimodal transportation future. Transit agencies, cities, and states can try to get ahead of the curve – but only if they choose to embrace innovation, and are willing to think big and small about how to improve service today to lay the groundwork for tomorrow.

Are you thinking about the different ways microtransit and autonomous vehicles will imapct urban land use? We’d love to hear your thoughts! Please reach out to Eric Rothman with any questions or comments.