How Should the Biden-Harris Administration Close the Digital Divide? 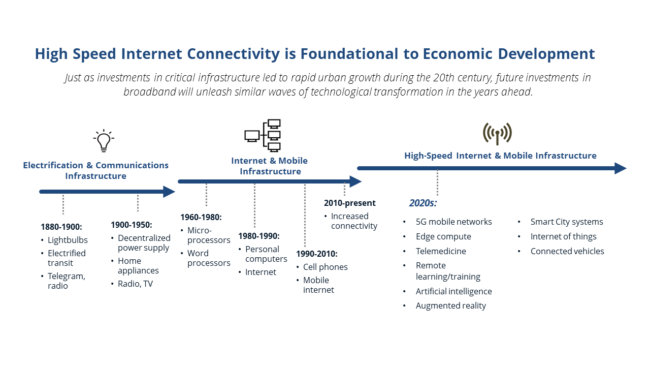 Equitable broadband service is foundational to equitable economic development in the 2020s. Today, 18.4 million American households are unable to access the full range of educational opportunities, jobs, and healthcare, because they do not have affordable, reliable, high-speed internet access. Universal broadband is not only an imperative for a just and resilient recovery from the COVID-19 recession, but it also represents one of the most potentially transformative economic development investments of the 2020s. In New York City’s Internet Master Plan, released last January, for example, we estimated that universal broadband adoption would unlock $142 billion in incremental Gross City Product, create up to 165,000 new jobs, and yield as much as $49 billion in new personal income – estimates confined to the City of New York, in which over 900,000 households do not have a broadband subscription at home.

The Biden-Harris “Build Back Better” agenda calls for closing the digital divide. The questions now are: how much funding will this initiative secure from Congress, and how will it be distributed?

We recently launched a survey on Local Priorities for a National Broadband Stimulus to inform the debate in Washington and Statehouses. Developed as a part of our new Broadband Equity Partnership, a collaboration with CTC Technology & Energy, this survey asks State and local leaders to share their thoughts on Federal funding and policy priorities, Federal broadband fund deployment, and today’s biggest barriers to closing the digital divide. More than five dozen communities have already responded, with more than half of the responses coming directly from government agency leaders or elected officials. We encourage all readers of A Just & Resilient Recovery to share this survey with their elected officials, department heads, and nonprofit community development leaders in their networks before we close the survey on January 15. We plan to publish the results with the Benton Institute for Broadband & Society by the end of the month.

The results of last month’s $900 billion COVID-19 relief package negotiations are informative context for the debate that is forthcoming. Going into December, the bipartisan “compromise” bill included $10 billion for broadband, with $6.25 billion expected as grants to State governments – an approach that would have empowered Governors to close the digital divide in ways befitting the geography, demographics, and market dynamics of their states. The final bill took a different approach: of $7 billion in total funding, more than $5 billion is likely to flow to large Internet Service Providers through funding short-term subsidies and equipment replacement. While the bill does dedicate funds for broadband connectivity in communities around Historically Black Colleges and Universities (HBCUs), as well as in rural areas and tribal lands, and earmarks funds for broadband mapping efforts, far more locally-tailored investment is needed. Without a more comprehensive approach, subsidies will do little to change the dynamics of the broadband marketplace to foster competition, support greater governmental regulatory authority, or deliver sustainable service affordability.

The leading model for a comprehensive Congressional solution comes from Representative James Clyburn, whose proposed $100 billion Accessible, Affordable Internet for All Act may attract bipartisan support, if former Florida Governor Jeb Bush‘s support for this level of investment is any indication.

Even with an ambitious, well-funded bill, however, we may still be poised for a top-down approach rather than one shaped by states, cities, and counties. Unlike Federal investments in more “traditional” infrastructure, localities have much less administrative capacity to spend on funding for broadband ubiquity. In contrast to transportation departments or housing agencies, information technology agencies do not typically have decades of experience administering urban broadband infrastructure or programmatic investments. The successes of some public service commissions, related public agencies, and utilities in administering the expenditure of Systems Benefit Charge funds may offer lessons, but these efforts have been mainly programmatic, not capital-intensive investment in infrastructure.

Our starting point is the question of how new federal funds will be distributed; we believe that the answer will be informed by actions that states, cities, and counties take. As spending proposals are released, debated, approved, and then designed as Federally administered programs, the next few months will be a critical period for local governments. In New York, the State’s Reimagine New York Commission is likely to shape an answer, while New York City is positioned to leverage Federal funding with $157 million in local capital allocations for broadband. Cities that have initiated partnerships with innovative local providers for free or low-cost services, such as the collaboration among the Housing Authority of the City of Los Angeles, Starry Internet, and Microsoft will draw from lessons learned and baseline funding needs to position digital connectivity programs to scale.

These are places that have at least nascent and growing capacity to deliver on the local level. They represent a fundamentally different approach to previous top-down investment, policy, and regulatory initiatives from Washington. The Internet represents the most transformative infrastructure for innovation perhaps ever developed. We hope that new Federal funding approaches share that spirit of innovation and grant local governments the resources they need to innovate and build the administrative capacity necessary to ensure that this essential utility is developed more equitably.

We look forward to sharing the results of our survey in the earliest days of the Biden-Harris administration.

For more on HR&A’s work closing the digital divide, see BroadbandEquity.org, and get in touch with Danny Fuchs, David Gilford, or Ariel Benjamin.