Building transit with neighborhoods in mind

Originally published in the October 2018 issue of MyLiveableCity. Written by Amitabh Barthakur and Ignacio Montojo

Cities in developing countries are experiencing an astonishing pace of urbanization and rapid growth with an unprecedented increase in transportation infrastructure investment. Around the world, almost 1,500 urban rail infrastructure projects are under construction, amounting to a total of 140,000 kms of new rail lines.

The growth of urban transit presents an opportunity to improve the standard of living for countless people, connecting them to economic opportunities and jobs. However, if transportation infrastructure is delivered without thoughtful consideration of the communities it serves, or the critical issue of focusing urban density, cities will be unable to fully leverage these significant investments and miss a once-in-a-generation opportunity to shape vibrant and sustainable neighborhoods through increased transit usage and access. 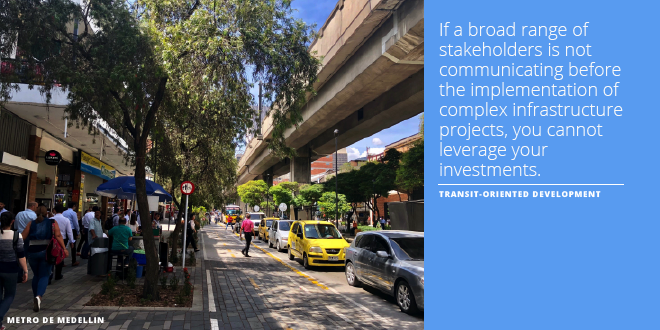 Transportation agencies are typically incentivized to deliver transit projects at a fast pace. Most capital funding sources for transit usually have strings attached, and fast delivery ensures mitigating against cost escalations. In highly urbanized cities, land acquisition for transit alignments is another key challenge and transportation developers typically want to keep land acquisition requirements to a minimum. As a result, transit projects are often thought of as pure infrastructure, meaning they are planned in isolation from the greater social and physical environment.

This strategy follows the path of least resistance. But, if transit lines and stations are planned with the long-term goal of creating dense, walkable, well-connected nodes, the impacts on the use and value of the land surrounding will be remarkably beneficial. Increased job opportunities, knowledge spillovers, and efficient land use leading to higher transit usage are among the many benefits associated with high density, transit-oriented communities. The largest share of this value manifests in the form of private investment, particularly real estate development around station areas and along transit corridors.

While transit and associated development is an economic developer’s dream, it can also be a large factor in the gentrification of neighborhoods and displacement of residents who could benefit from transit the most. What some academics have dubbed ‘transit-oriented gentrification’ is occurring in cities around the world. There’s enough evidence showing that transit proximity, in conjunction with an insufficient housing stock, will often increase housing costs and decrease the number of low-income households. 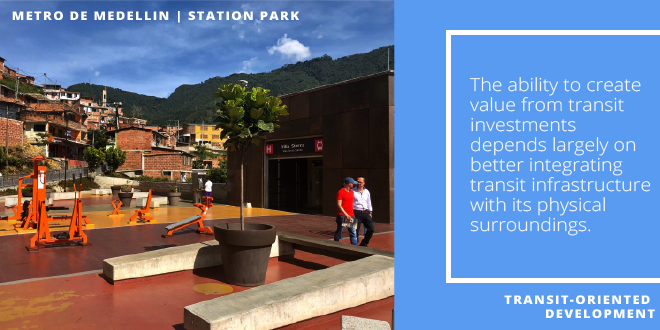 Under the right conditions, the public sector can capture the value transit creates, and create funding streams that use different ‘value capture’ mechanisms to not only fund infrastructure and public realm improvements, but also support equity initiatives like affordable housing and workforce development. Doing this requires big-picture thinking and proactive collaboration among city planners, economic development advocates, the private sector, community stakeholders, and infrastructure agencies at the earliest stage of planning.

Urban transit is particularly well-suited for value capture because it sparks development and revitalization. In Hong Kong, the rail property model unlocked development potential for over 600,000 public housing units. The success of the Mass Transit Railway system hinged on the proactive strategy of focusing all the city’s urban growth within proximity to its transit infrastructure. The system benefits directly from the private investment on transit-adjacent publicly-owned properties or from the sale and use of air rights above stations. The system also successfully generates ancillary revenues from retail and advertising within stations. With these streams of revenue, the system can invest in transit and other community benefits, completing a virtuous cycle of investments and benefits.

Value capture can be a critical element for cities looking to fully leverage their public investment in transit infrastructure in a manner that is economically sustainable and creates transit-oriented communities. But the ability to create value from transit investments in the first place depends largely on better integrating transit infrastructure with its physical surroundings. By integrating planning and value capture strategies early in the process before alignments are set, transit agencies can identify areas where transit is most urgently needed, urban designers and planners can design an interface that optimizes access and adds most value, economic development professionals can design appropriate value capture tools and, most importantly, transit developers can engage with community stakeholders to determine which services and community benefits are most desired.

A holistic approach to transit-oriented urbanism

In Medellin, Colombia’s second largest city with almost 4 million people, the public transportation agency Metro de Medellin, co-owned by the City of Medellin and the State of Antioquia, has played a significant role in driving an urban renaissance through a series of public investments in elevated rail, light rail, gondolas, and bus rapid transit. A foundational principle of Metro de Medellin was building the Cultura Metro, or the cultural identity and shared purpose for public good, to help develop marginalized sectors of the metropolitan area through transit investment.

Today, areas managed by Metro are perhaps some of the best cared for public assets in the region. While part of this is related to the operational efficiency of Metro as an organization, for the most part it is a manifestation of Cultura Metro. Metro’s goal, as an urban infrastructure provider and city-builder, is to ensure that Cultura Metro permeates the entire urban realm, not just within the transit system, but starting with the station areas and surrounding neighborhoods. To do this, Metro has taken steps to proactively think about integrating transit with its surrounding communities using a range of strategies, but three of them stand out in particular:

1. Bring everyone to the table to start thinking about land use from the very beginning.

Develop close collaboration and coordination between transit agencies, city planning and land-use authorities. If a broad range of stakeholders is not communicating prior to implementation of complex infrastructure projects, you cannot leverage your investments. A variety of people must be involved in implementation to ensure that transit infrastructure will be integrated rather than disruptive.

Collaboration between several public institutions was a key factor of Metro’s success in completing complex projects that complement its core transportation initiatives. Over time, Metro has also built internal capacity for interdisciplinary collaboration. Its urban development team of more than 30 planners, architects, real estate and financial analysts work closely with the transportation planning team and the City of Medellin’s department of city planning, to deliver integrated projects.

The agency is expanding its system, and for each line like the new Ayacucho Tram and H-Line Cable Car, they have started to define influence and intervention areas around stations and alignment. Intervention areas are immediately adjacent to transit stations and slated for physical interventions by Metro, particularly in terms of public realm, signage and access improvements. Influence areas, within the larger surrounding neighborhood, are planning areas that will directly benefit from new transit investments, generate ridership and present value capture opportunities.

2. Give transit agencies greater control on land-use along alignments.

The City of Medellín is in the process of granting Metro formal status as an urban development corporation, which will give the agency greater jurisdiction over land use issues, proximate to transit. Beyond defining design guidelines, open space projects and pushing transit supportive zoning, Metro will have the jurisdiction to apply eminent domain, collect revenues from certain value capture mechanisms in special financing districts, and manage the open space and public realm within intervention and influence areas. While empowering transportation agencies to implement station area development may not work everywhere, Metro’s demonstrated commitment towards a better urban environment combined with their intellectual and technical capacity to accomplish their goal of integrated transit use, can be very effective.

This approach ensures that planning for station areas happens early on and mitigates any conflicts between transit infrastructure delivery, operation, and the surrounding environment, in turn supporting greater ridership and enhanced economic benefits.

Trying to integrate surrounding land uses with transit infrastructure, once the infrastructure is already built, can be a challenging if not an impossible task. Metro’s approach to transit planning includes proactive strategies to acquire land, particularly around stations, that have the scale and capacity to be developed later. As transit stations are the primary interface between the transit system and the rest of the Metropolitan Area, this approach ensures station areas can support transit-oriented development, as well as safe and easy access to stations. The end goal is to have active station areas and higher ridership. Planning around Medellin’s Metro system also involved developing land in areas with little or non-existent public investment, with a focus on improving public infrastructure and amenities such as parks, libraries and streets.

Medellín’s integrative planning process has helped the city harness the value of transit not just in dollars, but also in improved quality of life and transformed the city for many generations to come.

Medellin is a narrow valley and Metro operates a range of interconnected modes to maximize transit access to all communities. This includes heavy rail that forms the backbone, connected by trams to the edge of the valley, which are further connected to cable cars that provide access to dense neighborhoods on the hillsides. People living in mountain areas surrounding Medellin have benefited by having their travel time to the city center reduced from an hour to less than ten minutes – improving their access to employment opportunities and other resources in the formal city.

The MetroCable planning exemplifies how transit can be used to benefit those who have low access to transportation in the first place. Public safety is another aspect of quality of life that has been improved for countless people in Medellín – the murder rate in the city has fallen by more than 80% since 1991, the decade before many of the integrative planning projects were introduced.

The new stations themselves have also transformed neighborhoods into resource-laden cultural and social hubs, with many libraries, schools and sports facilities built around transit stations. Investment in holistic transportation planning that accounts for improved connectivity and quality of life has worked to transform the social fabric of Medellin into one of Colombia’s most livable cities.

How can this work in my city?

Urban planning and design professionals have a responsibility to advocate that their respective cities build capacity around inclusive and integrative planning by engaging public, private and civic actors. Lack of cooperation and communication are major roadblocks to creating plans for transit that will encourage efficient, dense and inclusive growth, which in turn can support the long-term economic sustainability of cities.

We need to recognize that transit infrastructure development, economic development, community development and real estate development are not discrete activities that contribute to city building. They are interrelated processes that have symbiotic relationships with one another. While there may be a set of private and public actors who appear to have discrete roles in these activities, the lines between them need to dissolve if we are to create livable cities.

Amitabh Barthakur is a leading land-use expert and development economist. He’s worked with cities and transit agencies around the world to design value capture opportunities through real estate development and land use for transit systems and cities.

Ignacio Montojo advises cities and transit systems on public-private partnerships and innovative financing strategies for real estate and urban infrastructure projects in the United States and Latin America and the Caribbean.