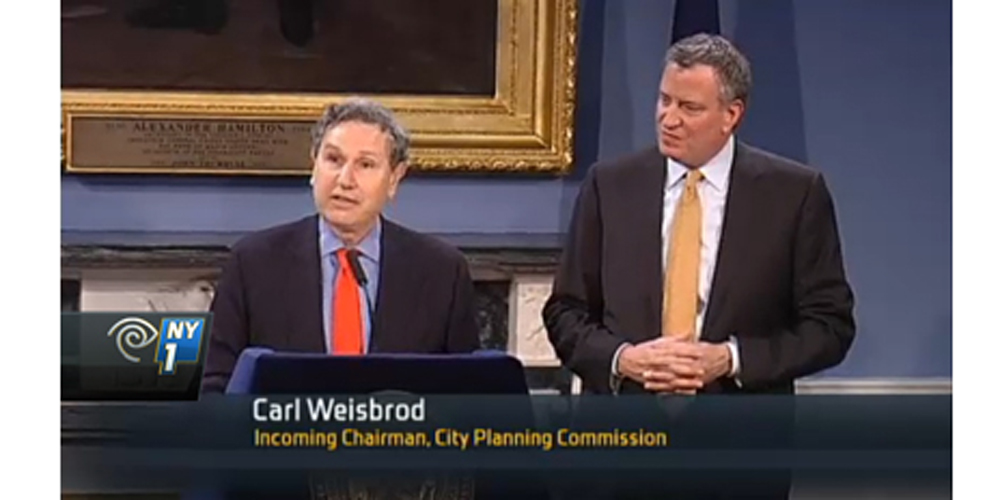 HR&A is proud to congratulate our Partner Carl Weisbrod on his appointment as Chair of the New York City Planning Commission and Director of the City Planning Department.

On Friday February 7th, Mayor Bill de Blasio appointed Carl Weisbrod as the Chair of the City Planning Commission and Director of the City Planning Department for New York City. “Carl is a quintessential New Yorker. He brings a real passion for our neighborhoods and our diversity across the five boroughs. And he also understands exactly how the City can shape development to stoke the most growth, the strongest affordability, and the best jobs for New Yorkers. He is ready to take these challenges head-on.” said Mayor Bill de Blasio at the press conference on Friday morning. For the last few months, Carl served as Co-Chair of Mayor-Elect de Blasio’s transition team, where he worked to define the next Mayoral administration. As Chair of the Planning Commission, Carl’s top priorities will be revitalizing neighborhoods in all five boroughs and helping to create 200,000 units of affordable housing.

“Carl’s love of New York and his renowned career guiding public agencies and leading the City’s most challenging and transformative initiatives positions him well to help shape the next stage of New York’s promising future,” said HR&A Chairman John Alschuler. “We are excited to see what the new administration brings, and applaud Carl for his commitment to New York City’s residents, businesses and neighborhoods. Carl is stepping into a very important position in New York City, and although we will miss seeing him in the office at HR&A every day, we are thrilled to see him take on such a respected and important role for New York.”

It has been a pleasure working with Carl on a host of successful projects over the last few years, and we look forward to his continued involvement in the City’s future. With over 60 employees in New York City, Los Angeles, and Washington D.C., HR&A will continue to provide high quality and innovative consulting services for all of our Clients as we expand our portfolio for public and private entities across the United States and abroad.

Carl joined HR&A as a Partner in 2011, where he continued his distinguished career revitalizing New York City neighborhoods. While at HR&A, Carl led a variety of projects including but not limited to: the rezoning of Hudson Square, the creation of a new Economic Development Department for the City of Los Angeles, and the design and implementation of Take the H.E.L.M., a competition with NYCEDC.

Read more about Carl and his new appointment in the New York Post, Globe St., The Wall Street Journal, and The New York Times.